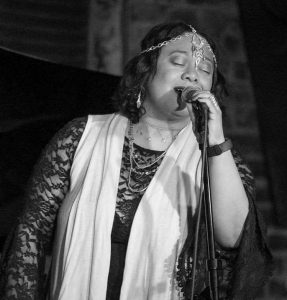 Blessed with an irresistibly soulful voice, Mycah’s music is in a class all her own. She has shared the stage with noted artists such as El DeBarge, Lyfe Jennings, The Whispers, Patti Labelle, Luther Vandross, JaRule, Arturo Sandoval, Debbie Allen, Frank McComb, Regina Belle & Maysa Leak to name a few.

During the summer of 2014, Mycah released a remake of the Michael Franks/Brenda Russell classic “When I Give My Love To You”, Featuring Kenny Wesley, which won the 29th Annual WAMA Award for Urban Contemporary Recording.

In 2016, Mycah released her debut album ‘Roux’s Fantasy’ to much acclaim.  “As soon as you hear the angelic voice of Mycah’s debut release… it will captivate your senses and brings enchantment to your soul.” ~Pamela Black of Pamela’s Place and KUNV 91.5 FM Las Vegas.