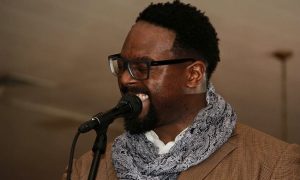 Baltimore native Marc Avon Evans possesses one of the most soulful baritones you will ever hear. Blues & Soul Magazine has compared Evans velvety voice to the R&B legend Donny Hathaway, for both its power and subtlety.

The versatility and depth of Evan’s songwriting craft make him stand out even further with beloved releases in neo-soul, house, acoustic hip-hop folk, and spoken word realms. Inspired by greats like Jimi Hendrix, Marvin Gaye, Sting, and Sade, Evans decided to focus on his lyrical development and perform on the open-mic poetry circuit. “I desired to be a better lyricist. Mainstream radio is full of great voices with little to say. I wanted my lyrics to be able to stand on their own.”

As “The Songbyrd”, Evans has travelled with the poetry trio “Da Minista, JaHipster, and The Songbyrd” up and down the East Coast from Massachusetts to the Carolinas.

In 2006, after years as a local and touring staple, Evans with DJ Spen and The Muthafunkas had a House Music smash with the single and album both titled “The Way You Love Me”. The success and acclaim sparked a global following that has led to regular international touring. But Evans has not left his beloved hometown behind, frequently performing in a range of projects that reflect his wide musical embrace. And every week he co-hosts Acoustic Thursdays at Peace & A Cup of Joe, Baltimore’s longest continuing open mic series and home to many of the city’s best and up-and-coming musicians and spoken word artists.