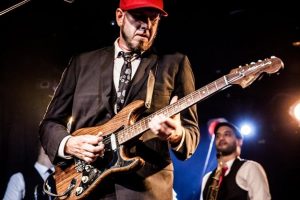 KCLR kicked off 2018 by releasing a reimagined version of Bob Dylan’s “The Times They Are a-Changin’.” For the band, it was a tribute to a legendary songwriter and a reaction to a difficult year across the globe. For fans, it was an opportunity to finally meet KCLR’s newest band members. All the pieces are now in place: the next year is going to be huge. The band’s eighth full-length record is slated for recording in fall/winter. KCLR toured Europe for the first time in 2019.

All this momentum has built from years of recording and touring, with support from some of Canada’s most dedicated fans.

On August 17th, 2015, KC Roberts & the Live Revolution (KCLR) touched down at the airport in Toronto to close out KCLR Go West, the band’s first-ever tour of the Canadian and U.S. west coast. KCLR hit 15 cities in 20 days, playing packed rooms from Edmonton to Los Angeles. KCLR’s fans stepped up to the plate in a huge way to make KCLR Go West a reality.

This was not the first time that KCLR has had a major crowdfunding success. KCLR’s 2013 album Parkdale Funk 2: SIDES (PDF2) was made possible by $26,000 in contributions from the band’s fans. The album’s 27 tracks highlight all of KCLR’s influences and left an immediate impression on fans and media alike. CBC Radio’s Errol Nazareth said of PDF2 that “I dug every track!”